I finished painting my US Marine contingent and I tried out something new as part of the painting process.

Here is one of the finished figures: 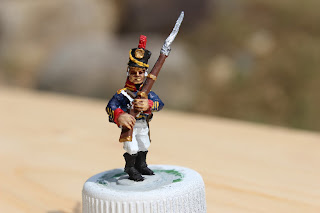 At this point in the past, I would have taken the time and black lined the entire figure.

Instead, I tried out a new shading wash using a mixture of artist inks and Pledge floor wax.  Here is a photo with the shading applied: 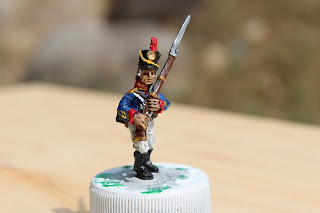 I kind of like the shading.  It gives the figure some depth, but it also looks much more the part of a 19th century soldier.
Posted by Mark Decoteau at 7:50 PM No comments:

In case you missed it on my regular gaming site, I thought I would give you a battle report on a game I hosted yesterday at our wargames club.

I had an opportunity to host a Regimental Fire & Fury war of 1812 game yesterday at the club.  The game went very well. Here are some photos of the game. My thanks to Bob, Paul, Mike and Matt for playing in the game!


I had a great time putting on this game.  I have run the scenario on four occasions using Volley & Bayonet Wing scale.  The games turned out fine, but I really enjoyed changing over to the F&F rules for a change of pace.  I am thinking that this will also make a great scenario for the new computer moderated rules that my friend AJ is working on.

The battle ended up being larger than I anticipated and so we did not get to a complete conclusion.  I hope to run it again this summer here at the house so we can hopefully fight the whole game.  As it was the Americans held onto the farm and could have pretty easily held the small bridge which was a tertiary victory condition.  The British caused more casualties then they took, and I think given a few more turns, they would have given the Americans a run for their money in the fight to control the farm.

The players also provided me with some great feedback on the victory conditions which I will incorporate into my next game.

Overall I would say that this was a very successful game which I hope players enjoyed participating in.

Hosted a Brother Against Brother game at the last club game night.  Here are some photos of the guys playing in the game: 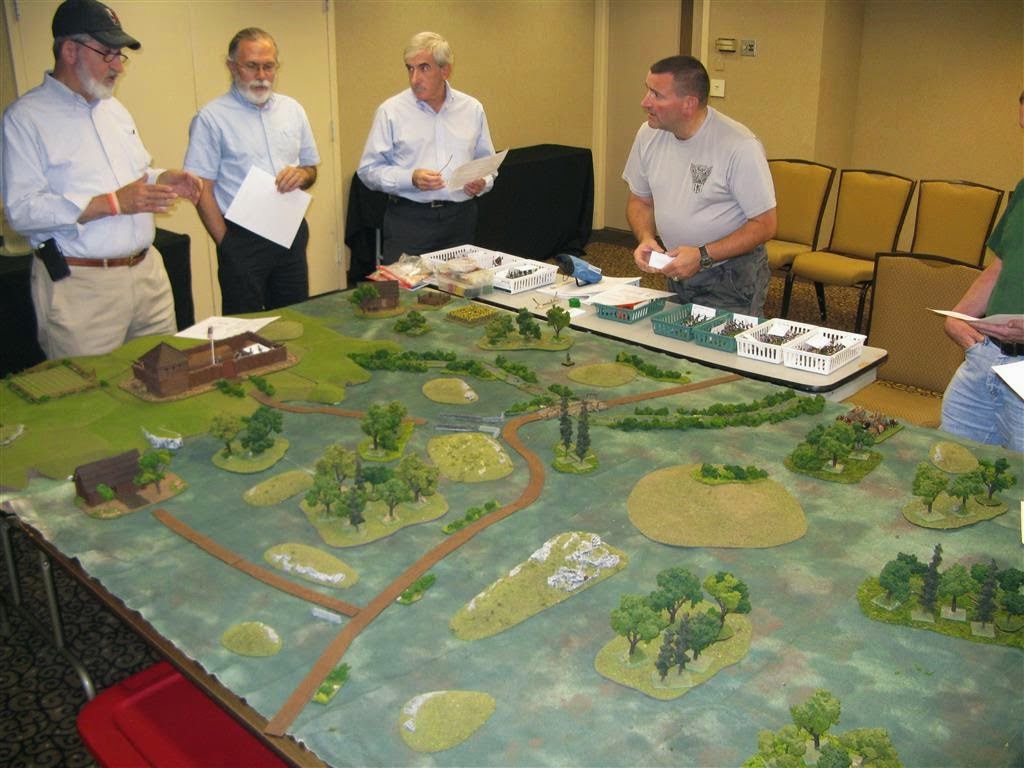 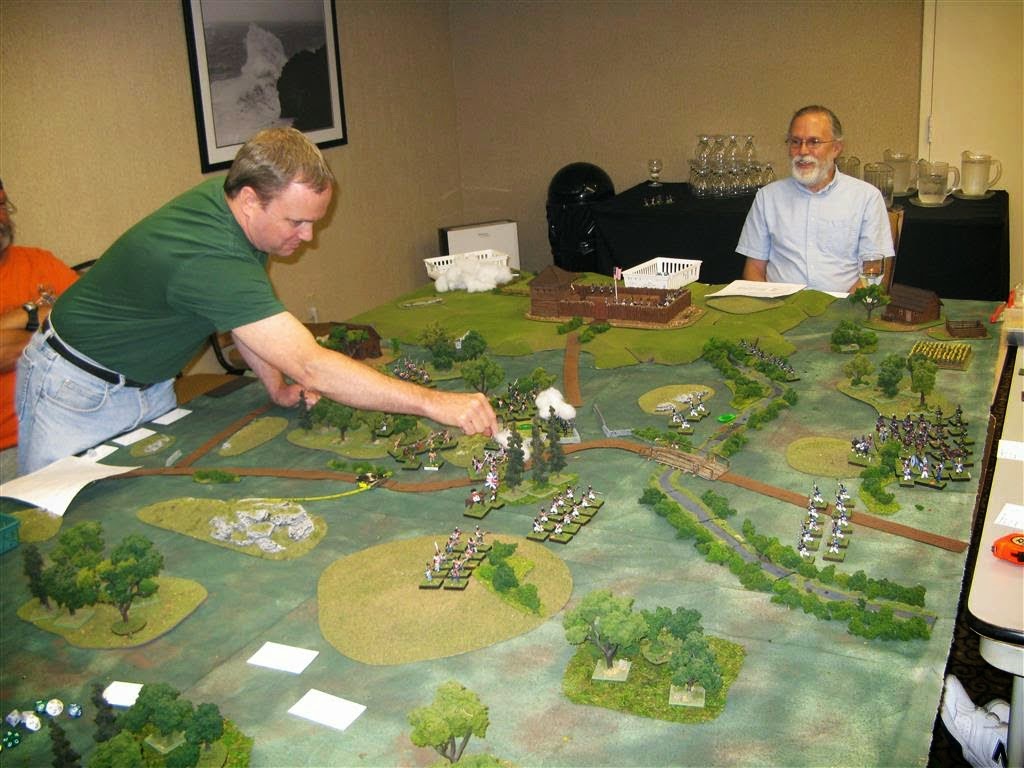 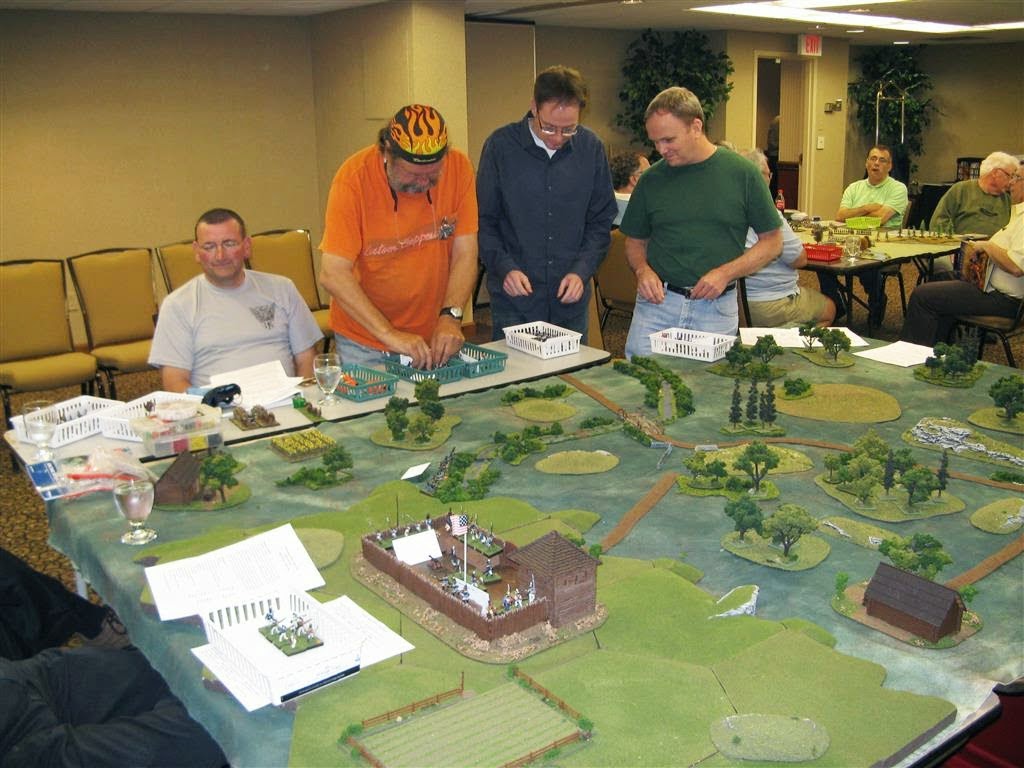 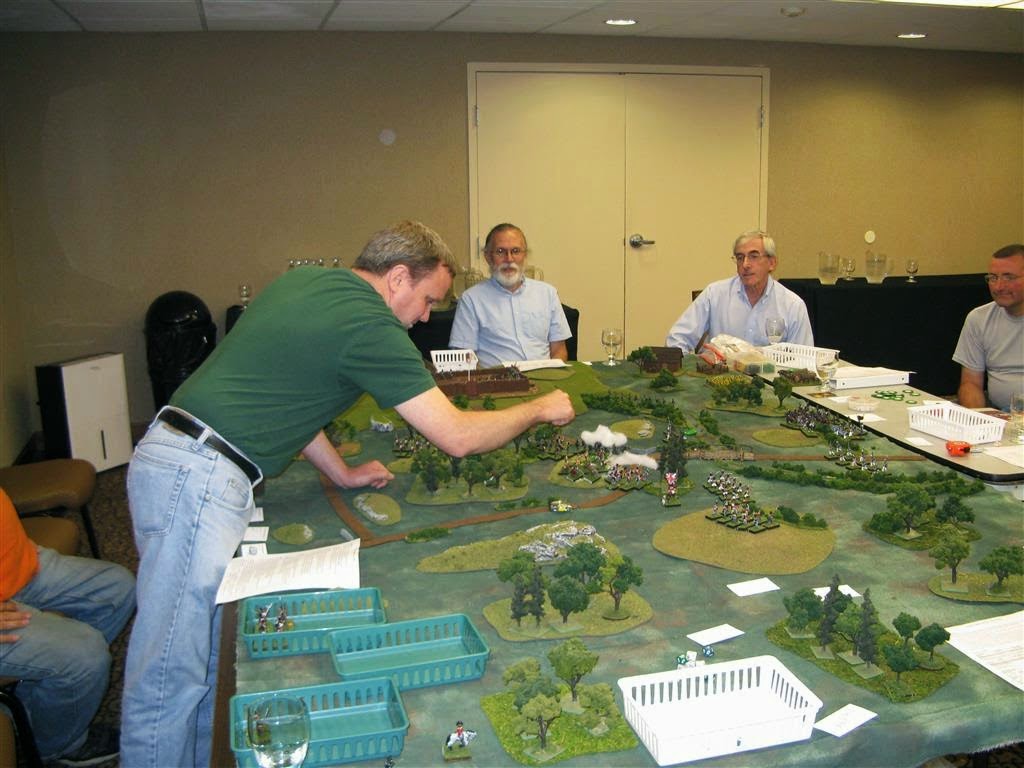 The scenario is loosely based on the historical Battle of Beaver Dams.  In this version of events the Americans are holding a small fort along the Niagara River Road.  The British have them under a loose siege and the Americans have to move a re-supply and relief force to the bridge.  The British must stop the relief column and try to take the fort.

During this game the Americans moved very slowly at the start and so they never really had a chance to move the supplies towards the fort.  This is one of the downsides of the variable movement aspect of Brother Against Brother.  The British initially stopped the Americans and inflicted casualties, but towards the end of the game the superior firepower of the American rifles squads all but destroyed the British.  Also, one of the British players suffered a THWACK! morale card and it took three turns to replace the company commander.  This stopped his force from assaulting the fort and really affected the overall British battle plan.  Both sides agreed that given enough time the Americans would be able to pull out a victory and relieve the fort.

This was a very enjoyable game and all of the players felt that the scenario could definitely be won by either side.  I have included all different kinds of troops in the orders of battle because I like having them on the board.  There are American Regulars, Rifles, Mounted Kentucky Rifles, and Militia.  For the Crown there are British Regulars, Royal Marines, West Indies Regiment, Militia, Voltiguers Canadiens, and Glengarry Light Infantry.  A real hodge-podge, but a lot of fun to play!

Overall I am satisfied with the scenario and I look forward to running it again in a couple of months at a convention in Vermont.
Posted by Mark Decoteau at 7:40 PM No comments:

Sorry that I have been away for so long!  Life has just been beating me down - but I am back and I want to share some photos of what I have been doing over the past 12 months!

I have been getting a Brother Against Brother game ready for our club game night in a couple of weeks.

Here are some photos of terrain and units that I am getting ready for the game.  Enjoy!

Hope you enjoy the photos!
Posted by Mark Decoteau at 11:34 AM 1 comment:

Heading home after attending HISTORICON.  We had a great trip and convention.  I have a couple of things for the War of 1812 from the Con.

1.  I picked up two packs of Knuckleduster figures for the collection.  I got the US Dismounted Staff pack and the US Militia Artillerist pack.  Both are excellent sets of figures.  I will be using the artillerists for my supporting guns at Queenstown Heights game.  The staff are for my army command stands and others specialist stands.

2.  I played in a Chrysler's Farm 1813 game.  I had a really good time.  The terrain was excellent and the figures were well painted.  I played in the game because they were using a set of rules I had not used before, Wellington Rules.  Designed for Napoleonic small unit actions, the rules seemed to work well for Wo1812.  I am considering getting them and trying them out for my games.

3.  In probably the find of the convention among the Northern Conspiracy, I got a set of buildings and a fort for my 1812 collection.  I will post photos as soon as possible.  There are five buildings, an animal pen and stockade fort with blockhouse all assembled and painted, ready to go.  Really good price at the flea market as I got them all for the same money that I was considering spending on a smaller fort and blockhouse kit unpainted!

Overall this was a great con and hopefully this, and the new house, will help get me motivated to get some 1812 gaming going!
Posted by Mark Decoteau at 6:45 AM No comments: 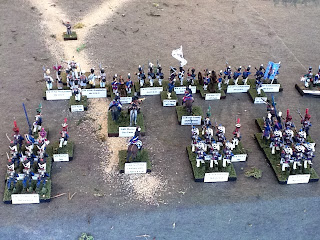 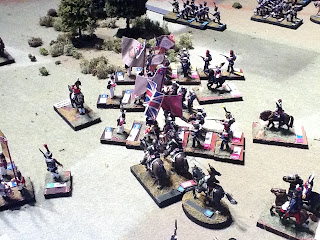 Posted by Mark Decoteau at 7:59 AM No comments:

I hosted another go at my Lundy's Lane refight on Friday night. We used Volley & Bayonet in Wing Scale. This was at least the fifth or sixth time that we have played this game, although we have been modifying the rules a bit just about every time we played. It was a great battle with much of the back and forth of previous games. Scott's Brigade attacked aggressively and early (very historical) with unfortunately the historical results of being almost completely wiped out! Ripley's Brigade and Porter's militia followed Scott into battle and actually closed with the British on the hill to good effect. The British took a very historical approach in their battle plan also. Guns were placed on the hill and their infantry supported the guns. They fairly well dared the Americans to attack! There was a slightly stronger push south by the British along the Portage Road but it was well handled by the Militia Brigade. Overall the British players had a good battle plan and they definitely had the dice rolls to back up their tactics! It seemed like every time there was a combat resolution or a morale check the appropriate die roll came up! The British were on fire. Overall this was again a very enjoyable scenario which could have gone either way. I am glad we had an opportunity to play the game.
Posted by Mark Decoteau at 4:29 PM No comments: